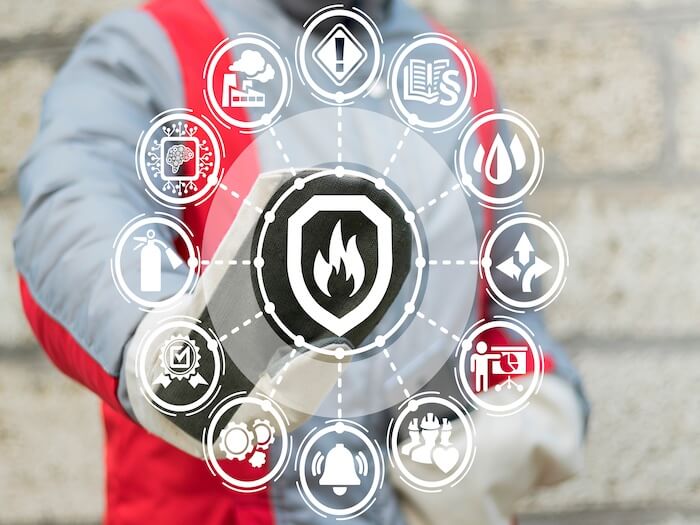 Fire alarm system installations can appear more complex and costly than other electrical contracting projects. After all, there are unique safety and legal concerns to take into consideration, and a construction project passing inspection on schedule can hinge entirely on the quality of its safety systems.

But there are materials and methods available that make installation easier, more efficient, more cost effective, and the finished result is reliable and sophisticated enough for any size project. Selecting the correct wire types, as well as the correct system itself, are critical for a safe and fast installation.

Several common questions we hear about relate to:

1) which wires are most commonly used for fire alarm systems?

2) what is the best bundled cable solution for a fire alarm system?


3) what are some advantages of addressable over conventional fire alarm systems?

What Types of Wire Are Used in Fire Alarm Systems?

Fire system cable is designated as FPL, FPLP, FPLR according to UL, and can be shielded or unshielded depending on the use and application.  FPLP is for use in Plenum spaces, FPLR is used in Riser applications, and FPL is UL tested and approved for certain flame and smoke standards, but can not be run in Riser or Plenum spaces. Riser space is the vertical shaft that wire is run from floor to floor in buildings.

Fire alarm cable is used for many sound and security systems applications including audio, PA and intercom systems. All fire alarm cables consist of groupings of single conductors under the outer jacket (usually red unless code allows otherwise). These multi-conductors typically consist of solid Thermoplastic High Heat-resistant Nylon coated (THHN) and Thermoplastic Fixture Wire Nylon (TFN) conductors. THHN and TFN are high-temperature wiring that are approved for fire systems, smoke detectors, and alarms. A contractor, depending on local code, may be able to run groups of single conductors equivalent to the premanufactured FPL type cables. In these cases, the contractor may want to consider using bundled cable to make the installation more efficient. However, the FLP cables are premanufactured and already exist to save the contractor time.

After the electrical contractor selects the wire and cable, the type of Fire Alarm System itself is chosen. There are two systems with proven track records of safety to choose from but each has trade offs. One costs up to 25% more, but offers pinpoint accuracy as to where the exact device triggered during an alarm, while the other is more cost effective but covers broader “zones” or general areas.

With the addressable system, the installer creates a single loop circuit, running a simple addressable system to a sub panel, then connecting all those sub panels back to the main control panel. This requires each device to be wired in a series with two cables to send and receive information. If there is a break in the circuit, the area is immediately identified as to what device could have failed. So if the heat sensor and smoke detector go off in an office closet space, the system identifies and responds to that specific area. However, to utilize the addressable system the electrician must connect and test all the devices which in terms of time is the same as connecting the peripheral devices in a conventional system, but the devices themselves and the panels are much more expensive. The contractor would then run all circuit cables from the main control panel of the system for each individual control panel on each floor.

In a conventional system, each floor would be wired as a “zone” and each device in that zone would be wired into the panel on their separate circuits. Then all these zones would be wired together into another panel, which would then be wired to the main control panel. So if an alarm is triggered in the scenario above the alarm would trigger “Zone 5” which would be the whole area of Office 5, even though the issue may only lie in the closet. In terms of safety, the conventional system does not compromise much, but saves the owner the costs of the addressable systems hardware.

However, since there are multiple circuits being run there is a lot more wire, which means a lot more time than just running two single cables to wire the devices. Here is where One-Pull bundled cable products help. Instead of pulling 4, 6, 12, or some other numbered individual cables to a zone to connect the distinct peripheral devices (strobe, horn, lighting sign, smoke detector, heat sensor, etc.), all the required  can be marked and bundled together it can be pulled at once, with specific breakouts at specific lengths to wire each specific circuit of devices. Each cable in the breakout would then be identified by the custom markings on the outer jacket to quickly identify what devices are on the circuit.

So what’s the difference between conventional and addressable fire systems? And what makes THHN/TFN bundles the best choice for almost any fire system installation?

While addressable fire alarm systems are preferred because they are precise, the conventional systems are still better than having no system installed at all. Conventional systems offer a “general alarm” and trigger a general response. So a smoke detector detects smoke, it sends a signal to the control panel, and the control panel then sends a signal to the “alarm” setting them off for the building.

In an addressable FAS, each device triggered is immediately identified at the panel as to exactly where the potential threat arises, what that threat is, and whether the issue is smoke detection, high heat detection, CO detection, sprinkler system activation, or an activated pull station. Each component of the fire alarm system has a unique address, so as soon as a potential threat is identified a quick response can be undertaken.

In conventional fire alarm systems each set of devices are wired into the control panel directly on an individual, unshared loop. This means that if smoke detectors for the 5th floor zone 5 office closet go off, a general alarm sounds for the building, and responders are notified the issue is on the 5th floor zone 5, but not which smoke detector or where in the zone it was triggered. In these cases, if the system activates the sprinkler, it would be activated for the whole zone, not just isolated to the closet. Since this is not a closed loop like the addressable system, if the wiring were to get damaged or severed the control panel would never know that the device is not functioning properly.

In the addressable system, a break would be detected by the cascade of the other peripherals in the circuit losing contact as well from one side showing the previous working device as the last operational one in the system. In the above example we know the device where the circuit communication is stopped form both directions, so the break in the system can be identified from the working devices on either side as being the  device(s) in between or the wiring for the device(s). In an example of a triggered alarm, using the same 5th floor example from above the addressable alarm, the system would identify the location with more detail: “5th floor, Office 5, room 10, closet, north smoke detector.” In addition to the greater security and precision of addressable fire alarm systems, the looped wire construction makes it easier to install than conventional systems because there is less wire needed as each device is wired to the next one.

So why do so many places still use the conventional fire alarm systems?

The biggest factor is overall cost. While there is a lot more wire and thereby wiring involved in a conventional system, and potentially more labor to install, the cost of the hardware and programming is considerably less than addressable system panels and programming which can be the determining factor in what system is ultimately going to be installed.

Want to learn more about our fire alarm system custom cable bundles? Send us a line and one of our representatives will quickly get back to you.